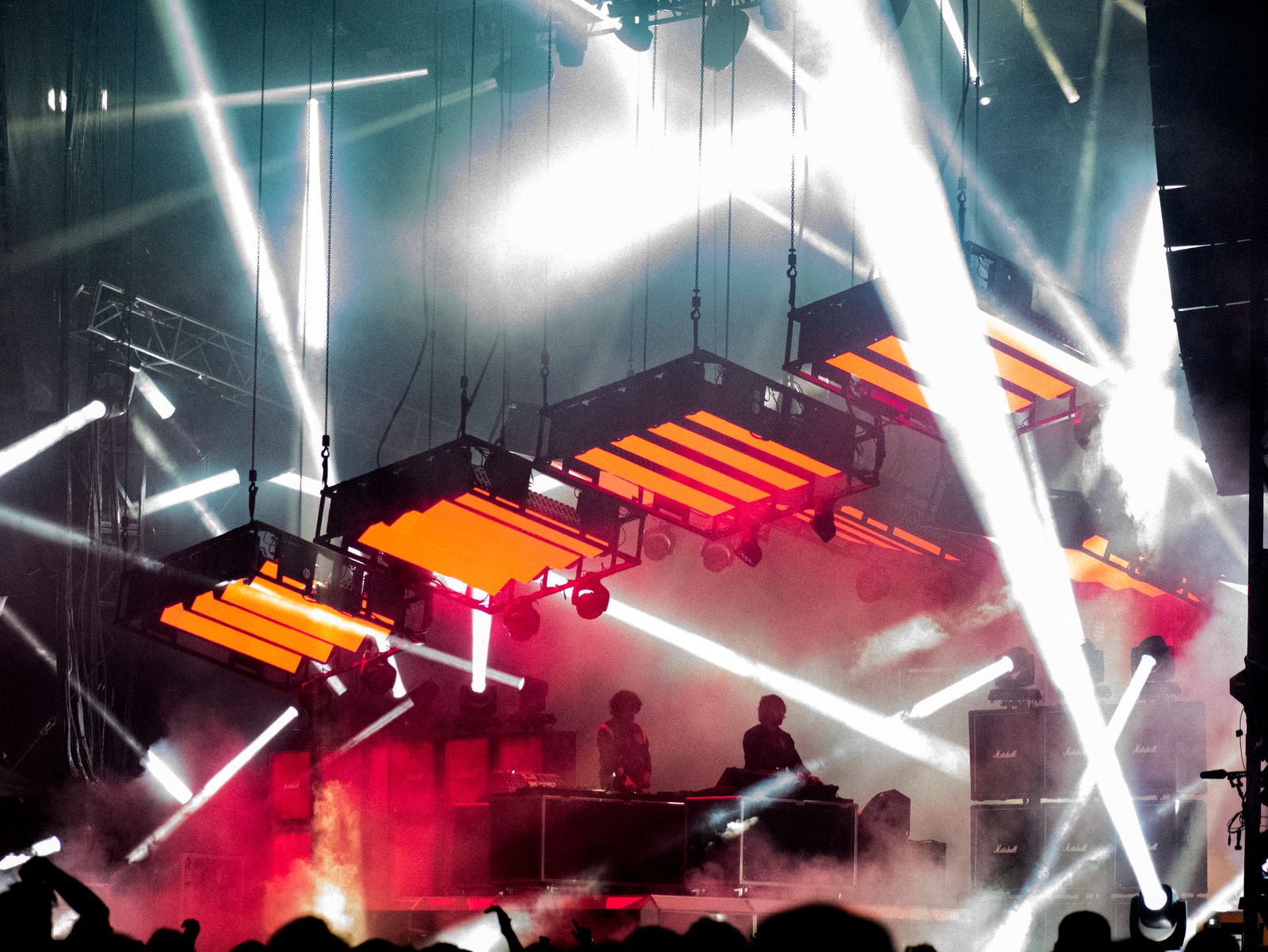 That time we cried at Day For Night Festival

My time at Day for Night Festival 2016 consisted of waiting in will call for over an hour, missing two sets I was excited to see, rushing through the art installations, being disappointed in a set I'd had high hopes for, and standing in a rainstorm (with 20 mph gusts of wind in 50 degrees for 90 minutes, mind you) because NO WAY WAS I MISSING APHEX TWIN.

And you better believe there was no way in hell I was about to miss it all the next year.

Day for Night is like no other festival I have ever attended. While 2016 was not the most flawless experience of my life, I saw the potential. I'd only attended one day, we arrived later than anticipated, the weather was total shit, my music taste had evolved more than I realized...these were all factors that weren’t the fault of the production team. I wanted more, so I bought a blind presale ticket the second they went on sale a month after I left the gates of D4N 2016. BEST. DECISION. EVER.

Fast forward to Saturday, December 16th 2017. My friends Brandon, Andy, and myself arrive in Houston at 1:30 pm, drop our bags at our friend's house, and call a Lyft pronto. Once there, I notice immediately that they've cleaned up the line mess from the previous year and the gates look much more organized. No lines longer than five people, clearly marked service booths... I'm already proud. This fest is still young, this being its third year, so they're clearly listening and learning from their past mistakes. Well done, D4N.

Our plan was to hit up the art installations first, and that we did. Into the old post office building we went! (Yep, it's an enormous multi story warehouse, abandoned for its original use, and it is AWESOME.) Two hours of wandering about, sitting immersed in, and staring awestruck at the phenomenal artwork presented by both local and non-local artists. Light and sound came together peacefully, aggressively, and hypnotically with each piece we came across. We saw robotics, code, LED screens, musical instruments, and nature. We heard laughing, whispers, gasps, and silence. It was the most impactful two hours I have ever spent at a festival, and my favorite thing to say about D4N to anyone who has not attended is, “The artwork alone is worth half the ticket price.” I might even be willing to move that up to three quarters of the ticket price. Shrug.

On a total high from how moved we were by the art, we started our musical journey for the day in the best spirits. Witnessed Pretty Lights perform a strictly modular set (quite different from his typical festival sets), then checked out a group called Forest Swords, who I'd only first heard of when they were booked for this fest. First time hearing these dudes and I ended up breaking down into tears at the end of their set because of how incredibly they performed. Like, artists should love what they do, and these guys LOVE WHAT THEY DO. It was beautiful, dude, music is just the fkng best. Then I fell in love with James Blake's haunting voice, danced in the rain for a few Nine Inch Nails rock tracks, partied to Drum N Bass with Roni Size (which was extra dope since I missed him when RME booked him), jammed to Bjarki's industrial and psychedelic techno set, and finished the night with Jamie XX. Met a bunch of cool people, ate a ton of good food, and ended the day ready as hell to go back the next day.

While day two was more music heavy, it was in no way lesser. We ended up meeting up with more friends and jumped around from set to set a good bit. Got a lovely dose of post rock beauty from both The Album Leaf (Brandon's turn to cry. Twice.) and Godspeed You! Black Emperor, experienced some new sounds with electronic band Mount Kimbie, learned I'm not a Phantogram fan (I tried), and got my mind blown by DJ Tennis's house set (really hoping he reschedules his date at Kingdom soon because I need more of that.) Finished up our night with a fire three hour acid and techno set by Nina Kraviz, who just made her Texas debut a few weeks earlier at Highland thanks to RealMusic Events, and delivered an equally fire set there too. Justice won for set of the day though, absolutely destroying mainstage with their visual production and overall killer performance. Haven't gone that crazy in a while. Lordt.

So, obviously, the music and the art were bomb dot com. But this festival isn't only fantastic because of the lineup, but also because of the whole vibe. This is one of the most chill and welcoming crowds I've been a part of. People of all ages, including kids, were consistently respectful of space, friendly, and there to legitimately enjoy the experience. I saw zero aggression, no creeps trying to get touchy, and was even so trusting of the environment, I left my friends to party at Marcus Marr's set by myself (literally something I have NEVER done at a festival. Also worth it because Marcus slayed.) The grounds were littered with local food vendors and bars, and everything was spaced well enough that it wasn't difficult to get from stage to stage. Being an urban location on the outskirts of downtown meant asphalt, which kept the grounds from getting muddy when it rained, as well as offered curbs scattered about for sitting down to eat or relax a bit. I noticed very little sound bleed, although some of the artists did complain about the monitor placement at two of the stages. But hey, now they know. It's always a learning experience in the arts, amiright?

I mean, really, I felt so at home the entire time while at Day for Night, never experiencing a moment of boredom, frustration, or discomfort. There was music for everyone of all tastes (tons of R&B and rap on the lineup too, just not my cup of tea), incredible immersive art, and an overall air of “everyone just have a good time.” Texas doesn't usually do festivals best for my personal taste, but I feel pretty confident saying when it comes to Day for Night, Texas is doing it damn well.