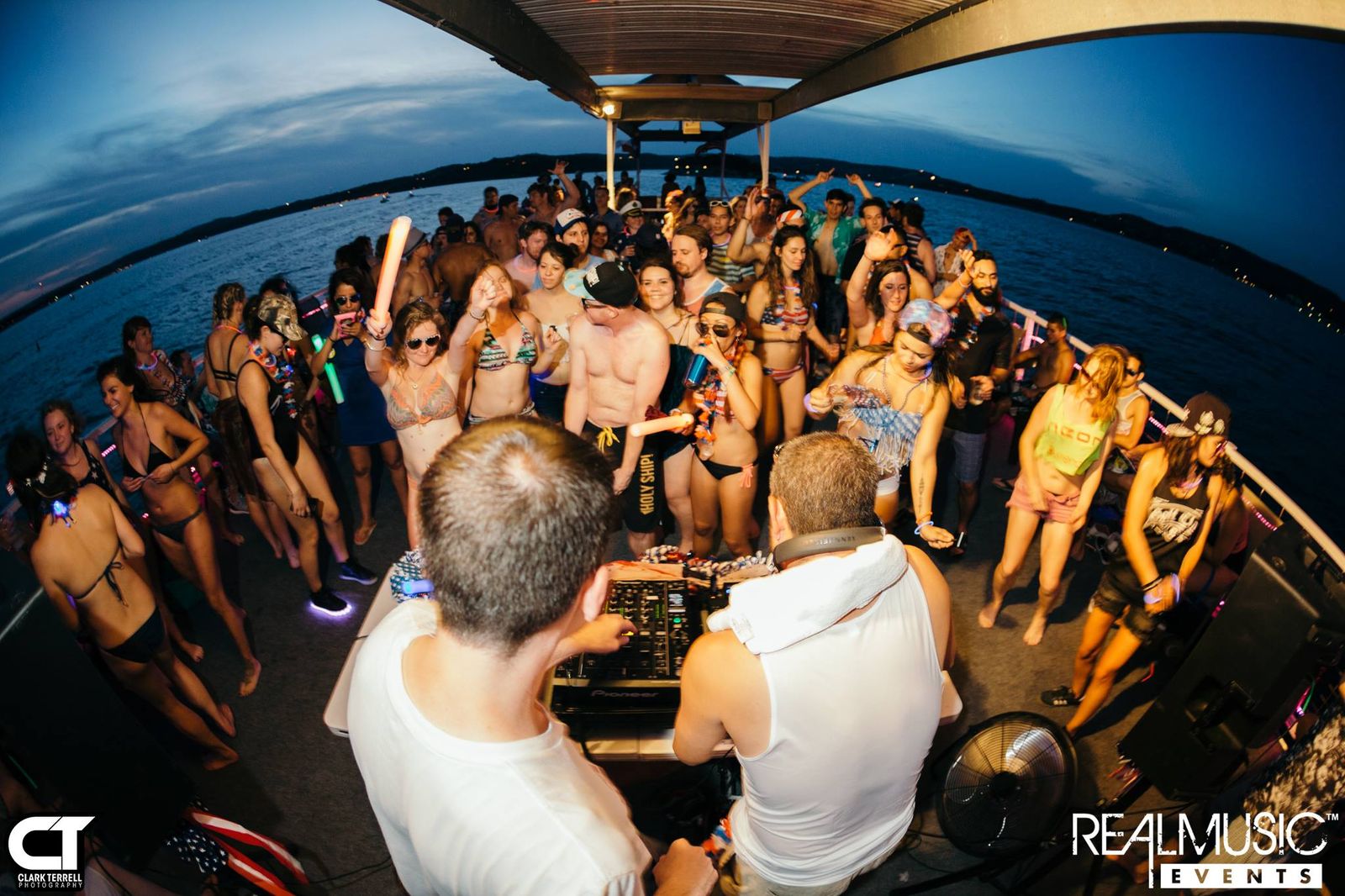 You could feel the excitement buzzing as the party crew of the 2017 SS IndepenDANCE lined up to get on the boat. Their luggage ranged from ice chests to beach bags to giant inflatable avocados, and they smelled, responsibly, of sunscreen. After some comedic (but serious) announcements from the captain, the boat roared to life and DFZ, Alec Palacio and Max Moreno, hit play on the first of many house music tunes to come.

Beach Front Boat Rentals provided a two story barge which became the SS IndepenDANCE for the night. The bottom level had chairs for relaxing, an open bar, and a grill where head chef Richard cranked out veggie burgers, chopped bbq sandwiches, and grilled corn on the cob. Upstairs hosted the DJ booth and dance floor where locals from the RealMusic Events resident team supplied the mid day energy and mood. After DFZ’s tech-house jams, Kai Castro soaked the crowd in sunny progressive house. Then came Nigel Napalm b2b Stephen Lyons, who brought the funk and groove with solid house selections. Spinning last from the locals, RME boss Andrew Parsons got the crowd prepped with some high energy records. Those looking to get wet could hop on the slide that descended from the top of the boat, dropping into the water to join their noodle and inflatable-riding peers.

Golf Clap, the heroic headliners from Detroit, took control of the booth as the sun was setting and the top deck of the boat immediately filled up. Tech-house was joined by disco and even a little deep-house as they showed the crowd a masterclass of 4x4 music. The turntablism was top notch as Bryan held an off-tempo vocal loop on top of the main track, scratching it into time flawlessly. Hugh took advantage of the ground level DJ booth by interacting with the crowd non-stop, handing out branded goodies and passing glow batons back and forth with the front line of dancers. The crowd was so enthusiastic that halfway through the set, the boat staff politely dispersed the dancefloor as the boat was leaning forward from all of the unbalanced weight. Eyes turned to the sky as fireworks lit up the horizon from all directions while the SS IndepenDANCE glided across Lake Travis. As the last track began to fade out the crowd demanded an encore but, unfortunately, the shore had snuck up behind them. Smiles glowed in the darkness as the party crew walked back to their cars or bus, tired and satisfied.

After an excitingly exhausting day on the boat, RME was fortunate enough to get a few minutes of Golf Clap’s time to answer some questions regarding their rise as electronic artists, as well as their top taco. Here’s what Bryan and Hugh had to say:

How is your personality reflected in your work?

House music by nature is very personal and there is such a wide spectrum of styles that you can create something for just about every mood. We have always been into deep house, and will always write deep house, but as things have shifted over the last few years, we've had some real fun making tougher louder beats. This also signifies our commitment to the music and that we are taking things much much more seriously than we ever have before

What other producers are you listening to currently?

A lot of the music coming out of Spain has really caught our attention lately. Specifically artists like Cloonee, Wade, De La Swing, etc. There are also some very interesting things going on outside of house that have caught our eye too.

What non-musical art forms do you draw inspiration from?

We are into a lot of pop and classic art. Hugh used to be big into KidRobot and designer vinyl figures as well as Banksy, Kaws, Tristan Eaton, and many others. There is a lot of similarities between the two worlds both in the execution and the business side of it.

What do you hope others get out of your music?

An escape from their everyday lives and getting to recharge themselves. People really need to make sure they take time out to recharge by going out and doing what you want. It makes you much more productive in your professional lives.

What was your "Aha!" moment, when you really felt like you "made it?"

I don't think anyone has ever "made it". Each achievement reached is only replaced by a new, larger goal. Even the thought that we "made" anything would be counterproductive in the long run. That being said we have come a long way individually, and together as a group and team, and we are very grateful of that and the people that have made it happen with us.

And since our company is based out of Austin, I must ask you both to describe your perfect taco.