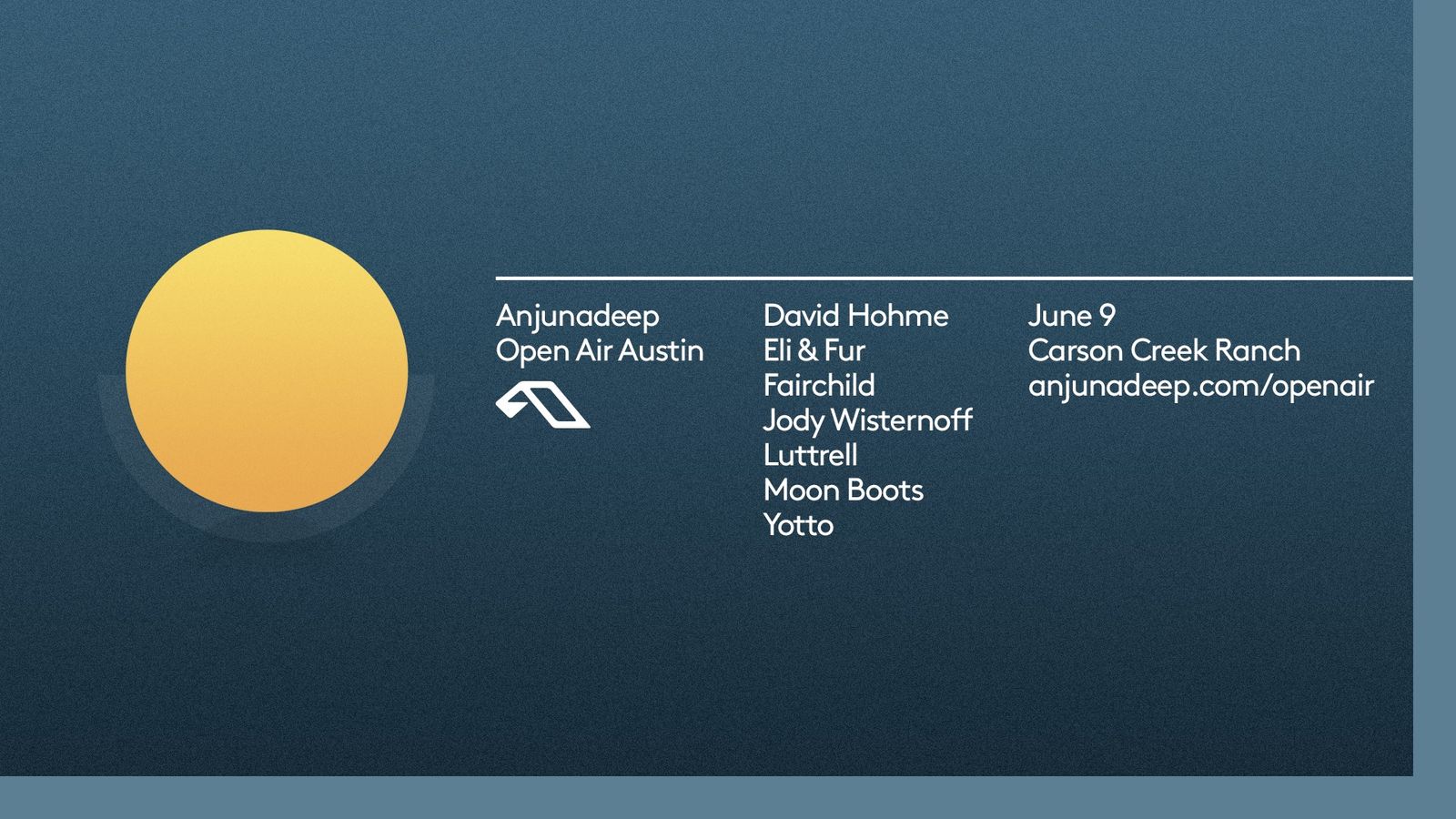 It’s no secret that the electronic scene in Austin has had its ups and downs with finding its place among the music scene here. With such large, successful festivals like Austin City Limits, South by Southwest, and Reggae Fest attracting consistent crowds every year, analog tends to dominate as the live music of choice. Not saying I have any beef with analog, I grew up on that good good. But UGH the summertime is just SO PERFECT for daytime fests fueled by dance music. Lucky for meeeee, Andrew and Kelly of RealMusic Events seemed to have read my mind and were like “Yo Kels, we gotchu.”

RME has been working towards this moment for YEARS, and is so psyched to be producing festivals with label partnerships, plus its very own 2 day festival this September, if you haven’t heard: Seismic Dance Event! More TBA soon EEEEEEP.

SO, after an extremely successful day festival with Dirtybird hosting their first ever Texas edition BBQ, the gifts keep on comin’. Anjunadeep Open Air has hand picked Austin & RME as one of their destinations this summer, and RME has planned this melodic escape to take place this Saturday, June 9th, at Carson Creek Ranch. Known as the deep house side of the Anjuna brand, every artist on this day fest’s lineup is guaranteed to deliver an absolutely beautiful escape.

Let’s talk about the names on this lineup, shall we? (Oh and PS - as a relatively learned Anjunadeep listener, this lineup is fkng ridiculous and Austin is getting spoiled and sjkfhslgkjsfh SRSLY WHOEVER IS NOT THERE IS SO WRONG.)

Moon Boots - You want soul, this man will give you soul. Moon Boots, aka Pete Dougherty, is a Brooklyn native who grew up playing piano and had an early heart for synthesizers. He realized while studying engineering at Princeton that his future lie elsewhere, so he dropped out to move to Chicago and pursue music full time. Through a series of successful encounters, plus years of tenacity, Pete was introduced to the Anjuna family where his productions have flourished. His love for soul, funk, and disco ooze out of his sets into the bodies on the dance floor, and if you see anyone NOT smiling the entire time he’s playing then you should not trust that person with their black soul of emptiness.

Yotto - First thing, Otto Yliperttula has got to be some sort of superhero name in the making, amiright? Can I be from Finland and have a cool af name too? So, if you haven’t heard of Yotto, then know that this guy is like, the household Anjunadeep name to know. He’s been making waves for several years now, signing records to multiple labels, and sharing the bill with notable artists such as Eric Prydz and Dixon. While he leans deep and progressive house, Otto has also released some more eclectic tracks as well, showing off his impressive versatility as a producer. The best part about his upcoming set at Open Air is that it could go several different directions (honestly, don’t be shocked if he goes full techno for a bit), but no matter the journey Otto takes you on, it will be an incredible set to experience. Oh and he’s also goofy as shit, go look at his latest cover photo on his Facebook lolol.

Eli & Fur - This female electronic duo, consisting of Eliza Noble and Jennifer Skillman, has been writing and performing together since their teens. Having a background in songwriting helped them move into production smoothly once they felt comfortable with the DJ’ing side of things, catapulting them into the scene in 2013 with their track “You’re So High.” Eli & Fur went on to pick up several notable awards in 2015, including such as Beatport’s “Artist to Watch”, which is dope af and girl power and all that cool shit. Often driven by moody vocals over catchy house beats, these women’s tracks are going to bring the upbeat party vibe to the ranch, no question.

Jody Wisternoff - Jody first broke into the scene as a wee 13 year old kid when he reached the finals of the DMC World DJ Championship (wait what), and then went on to DJ his first club show at SIXTEEN YEARS OLD (WAIT WHAT LOL what am i eVEN DOING WITH MY LIFE.) Since then, Jody has not slowed down for a second. His popular collab with Nick Warren (this man is a l e g e n d), Way Out West, has four albums under its belt and has been orchestrating dance floors for over 18 years with its progressive beats. Jody also has many singles and remixes under his own name, including his only solo album, Trails We Blaze, which was released by Anjunadeep in 2012. Now a father of two, Jody manages to balance his work and family life well, and can often be found letting loose with us lowly peasants on the dance floor before and after his sets. Which is dope. Jody played Kingdom last time Anjunadeep came to Austin and the man THREW DOOOWWWN. Heavy hitting, driving deep house with a progressive spin, perfect for peak time.

Luttrell - Hailing from San Francisco and half of the electro duo The M Machine, Eric Luttrell has been gaining traction with Anjuna the past few years, appearing on showcase lineups left and right, while also releasing a steady stream of productions on the label. Originally an analog fan, following bands such as The Smashing Pumpkins and Nirvana, Eric was introduced to techno while studying abroad in Berlin. His productions bring a fresh sound to Anjunadeep I don’t personally find anyone else creating, focusing on the deeper side of house with creative percussion and a playful use of vocal samples. I love LOVE the direction he’s taken his music, and have really enjoyed watching his career unfold. ERIC RULES.

David Hohme - This is the only name on the lineup of which I am admittedly a bit uneducated, BUT reading up on this dude, I have no idea how I’ve managed to not file his name away in my “GIRL, check this artist out” brain folder. David has been playing shows in NYC for nearly a decade, as well as played Burning Man for the past six years. His production has gotten support from huge names, such as Richie Hawtin and Marco Corola, and he just released his debut EP with Anjunadeep, Soft Landing, in April of this year. David’s production style feels silky smooth, the kind of deep house that makes you close your eyes and let the music take you on a journey. I’m into it. You should be too.

Fairchild - This guy was quite the mystery for a good bit, and is still relatively private online. I remember first hearing about Fairchild because of his consistent support from Kaskade (Ryan Raddon), causing many to speculate that perhaps Fairchild was in fact a deeper, more proper progressive house moniker of Raddon’s. But this mystery was debunked quite some time ago, and I have personally met the man (I’d be quicker to think he’s actually Jeremy Olander than Raddon tbh) and seen him play myself. AND HE IS AMAZING. Expect beautiful and atmospheric melodies to float you through your afternoon set with Fairchild.

So there you have our seven Anjunadeep Open Air artists. I have seen them all play at least once (minus Davie, but will soon rectify that) and I give them all multiple stamps of approval. UGH YOU GUYS HAVE NO IDEA HOW AMAZING SATURDAY IS GOING TO BE. Here’s some choons to check out in the meantime, and can’t wait to see all your beautiful faces at Anjunadeep Open Air <3.